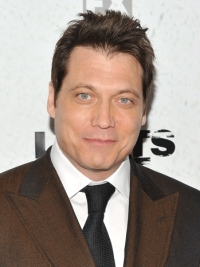 Holt was born into a family of New York City actors; his mother is the renowned singer/actress Julie Wilson, and his father was Tony Award-winning actor and producer Michael McAloney. He began school in Dublin, Ireland at the age of five before his parents moved back to NY. At 14 years old, he ran away from home and took a Greyhound bus to Los Angeles to pursue his dream of becoming an actor but his parents tracked him down and sent him back to Ireland to boarding school.

Following high school, Holt went to France to continue his education. He learned French at the Sorbonne, studied art history at the Paris American Academy, and theater at L'Ecole Marceau and L'Ecole Jacques Lecoq. He spent a summer studying Shakespeare in Oxford then moved back to New York City permanently to begin his acting career. He now makes his home in Los Angeles and New York, is a history lover who enjoys reading biographies.

Holt most recently starred in the critically acclaimed dramatic series Lights Out (2011) for FX, earning rave reviews for his performance as heavyweight champion Patrick "Lights" Leary. Holt next appears in a number of upcoming films including the period crime drama Gangster Squad (2013), a futuristic retelling of Herman Melville's classic "Moby Dick", titled "White Space", and an exploration of extrasensory perception, The Ganzfeld Haunting (2014). Other film credits include Fight Club (1999), Three Kings (1999), Men of Honor (2000), Below (2002), Vantage Point (2008) and The Losers (2010). On television, Holt played a detective with psychological problems on CSI: Miami (2002) and a soldier with post-traumatic stress disorder on Criminal Minds (2005), among others. For the stage - "The Taming Of The Shrew", "Twelfth Night", "Bovver Boys", "Rosetta Street", and "By The Sea, By The Sea, By The Beautiful Sea".