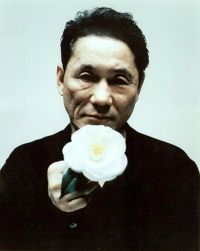 Takeshi Kitano originally studied to become an engineer, but was thrown out of school for rebellious behavior. He learned comedy, singing and dancing from famed comedian Senzaburô Fukami. Working as a lift boy on a nightclub with such features as comic sketches and striptease dancing, Kitano saw his chance when a comedian suddenly fell ill, and he went on stage in the man's place. With a friend he formed the comic duo "The Two Beat" (his artist's name, "Beat Takeshi", comes from this period), which became very popular on Japanese television.

Kitano soon embarked on an acting career, and when the director of Violent Cop (1989) (aka "Violent Cop") fell ill, he took over that function as well. Immediately after that film was finished he set out to make a second gangster movie, Boiling Point (1990). Just after finishing Getting Any? (1994), Kitano was involved in a serious motorcycle accident that almost killed him. It changed his way of life, and he became an active painter. This change can be seen in his later films, which are characterized by his giving more importance to the aesthetics of the film, such as in Fireworks (1997) and Kikujiro (1999).