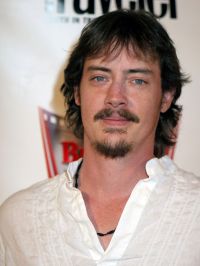 Handsome young lead of film and TV who made an impressive debut in the period feature, 'The Man in the Moon' (1991), Jason London belongs to yet another acting clan: his twin brother Jeremy has also been amassing credits through the early 1990s (sister Dedra, an actress, died in a car accident in 1992). A newcomer when he auditioned for 'The Man in the Moon', London went on to appear in the thriller 'December' (also 1991) before hitting his stride with Richard Linklater's Gen-X comedy 'Dazed and Confused' (1993). As Randy 'Pink' Floyd, football player and group conscience for this latter-day 'American Graffiti', London conveyed the proper combination of self doubt and confidence for a teen on the verge of adulthood. He played one of Susan Sarandon's brood in the drama 'Safe Passage' (1994), a small-town hick entranced with John Leguizamo's Chi Chi Rodriguez in 'To Wong Foo, Thanks for Everything, Julie Newmar', and a victimized teen in the drama 'Fall Time' (both 1995).
On TV, London bowed in a Fox vampire thriller, 'Blood Ties' (1991), then went on to appear in such TV movies as 'Country Estates' (ABC, 1993), the 1993 PBS film 'I'll Fly Away: Then and Now' (as Nathan Bedford, the role for which he had auditioned but was played by brother Jeremy in the series) and the Kurt Russell role in ABC's 1995 remake of 'The Barefoot Executive'. London's miniseries have included 'False Arrest' (ABC, 1991) and 'A Matter of Justice' (NBC, 1993), and he has guested on such series as 'Tales From the Crypt', 'The Outer Limits' and 'Route 66'. He also starred in the high-tech Aerosmith video 'Amazing' (1994).