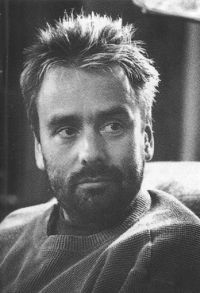 Luc Besson spent the first years of his life following his parents, scuba diving instructors, around the world. His early life was entirely aquatic. He already showed amazing creativity as a youth, writing early drafts of The Big Blue (1988) and The Fifth Element (1997), as an adolescent bored in school. He planned on becoming a marine biologist specializing in dolphins until a diving accident at age 17 which rendered him unable to dive any longer. He moved back to Paris, where he was born, and only at age 18 did he first have an urban life or television. He realized that film was a medium which he could combine all his interests in various arts together, so he began taking odd jobs on various films. He moved to America for three years, then returned to France and formed Les Films de Loups - his own production company, which later changed its name to Les Films de Dauphins. He is now able to dive again.