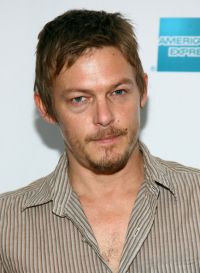 Norman Reedus was born in Florida, where he lived only a few months before moving to Los Angeles, California. He also lived in several cities in several different countries including Japan, Britain, and Spain. In Los Angeles, he worked at a Harley Davidson shop in Venice and at the same time contributed artwork to various shows as a painter, photographer, sculptor, and video artist. He got his first taste of acting in the play "Maps for Drowners" at the Tiffany Theater on Sunset Boulevard. Days later, he was cast in Mimic (1997), then in Six Ways to Sunday (1997), and Floating (1997). He then on to do many other films including The Boondock Saints (1999), Deuces Wild (2002), Blade II (2002), Let the Devil Wear Black (1999), Gossip (2000/I), Moroz po kozhe (2007), The Notorious Bettie Page (2005), Hero Wanted, and many others. Norman currently lives in New York with his son, Mingus Lucien Reedus.