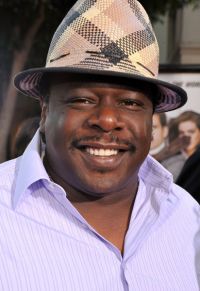 Popular and portly bespectacled African-American comedian Cedric 'The Entertainer' was well-known for his inclusive brand of observational comedy, and reached a wide audience as a cast member of 'The Steve Harvey Show' (The WB, 1996-2002) and as showcased in the Spike Lee concert film 'The Original Kings of Comedy' (2000). Born and bred in St. Louis, Cedric 'The Entertainer' (ne Cedric Kyles) started his stand-up career in the mid-1980s, playing the comedy circuit in his hometown. When comedian Steve Harvey saw the young man's act, he booked Cedric as a headliner in his own comedy club in Dallas, effectively giving the comedian his big break. Making his television debut in 1992 on an episode of 'It's Showtime at the Apollo', Cedric's profile was steadily on the rise, and a 1994-1995 stint as host of BET's comedian showcase series 'Comic View' would offer him enviable exposure. The network also lauded the stand-up with the Richard Pryor Comedian of the Year Award in 1994. When 'The Steve Harvey Show' began its run on The WB in 1996, Cedric was right by Harvey's side, impressing with his regular role as Cedric the phys ed instructor, the best friend and roommate of Harvey's Steve Hightower, a jazz musician turned high school teacher. While 'The Steve Harvey Show' was a successful and long-running series, Cedric wasn't shy about branching out, and made his film debut in 2000 with a supporting role in the comedy 'Big Momma's House'. That same year he and Harvey were profiled along with D.L. Hughley and Bernie Mac as 'The Original Kings of Comedy.' In 2001 he was featured as the preacher presiding over the funeral chronicled in the comedy 'Kingdom Come' and lent his voice to the zoo bear in 'Dr. Dolittle 2'. The following year his voice would be heard in the animated feature 'Ice Age' (2002), while the man himself could be seen in an appealing supporting role in the otherwise dreary comedy 'Servicing Sara' (2002). Cedric took his acting to a new level as he is cast as Eddie, a barber in his early 60s who is the elder statesman of a Chicago barbershop, in the summer comedy feature 'Barbershop' (2002). The character of Eddie voiced very controversial opinions and perspectives that caused much furor within the African American community; indeed, many influential leaders urged moviegoers to boycott the film, but 'Barbershop' nevertheless became a huge hit, crossing ethnic boundaries. Cedric's adroit, knowing portrayal earned praise, but the actor also caught flack for his character's opinions and some camps suggested he suffered for the controversy when it came to awards season, particularly among politically correct organizations. Still, Cedric's popularity continued to broaden, and his sketch comedy series 'Cedric the Entertainer Presents...' (2002-2003) scored modestly in the ratings for the Fox Network but sparked some disbelief when it was not renewed for a second season. The actor returned to the big screen as a private detective in the Coen Brothers' screwball comedy 'Intolerable Cruelty' (2003), as well as for the sequel 'Barbershop 2: Back in Business' (2004). The actor made a rare comic misstep when he took the lead in the uninspired 'Johnson Family Vacation' (2004) where he played a bumbling dad in a film that owed all too much to the Chevy Chase 'Vacation' movies, then had a welcome cameo as the Detective in 'Lemony Snicket's A Series of Unfortunate Events' (2004). Cedric delivered one of his most fully developed and subtly humorous performances with his turn as the frustrated rap mogul 'Sin' Russell, who crosses swords with shylock-turned-aspiring-music producer Chili Palmer (John Travolta) in 'Be Cool' (2005), the entertaining sequel to 'Get Shorty.' Less successful was the limp comedy 'Man of the House' (2005), although Cedric provided most of the film's amusing moments as the career criminal and former cheerleader bedeviled by Texas Ranger Tommy Lee Jones. He then provided his guttural voice to “Madagascar” (2005), Disney’s animated adventure about four zoo animals who escape and inadvertently find themselves in Africa where the city slickers struggle to survive in the wild. On the heels of the success of “Madagascar,” Cedric was seen playing Ralph Kramden in Paramount Pictures’ rehash of the famed 1950’s sitcom, “The Honeymooners” (2005). Updated with an all-black cast, “The Honeymooners” looked to be a fresh take on an oldie-but-goodie; instead, critics complained about a lack of chemistry—particularly between Cedric and co-star Mike Epps, who played best friend Norton—and a bow to political correctness when it was known that the movie conspicuously lacked Ralph’s famous threat to send Alice to the moon.