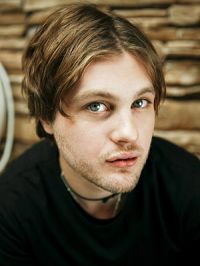 He moved to New York City from West Orange, New Jersey, when he was 16 with two cents, a ball of lint, and no place to stay. He got a job as a bike messenger. He studied for a while at the American Academy of Dramatic Arts. He was cast as Henry in "Dawson's Creek" (1998) after someone from the series saw him in the play, "The Trestle at Pope Lick Creek" at New York Theatre Workshop.

Plays guitar and sings in the band Pagoda.

His favourite movie is My Own Private Idaho (1991).

Is one of the faces of "Emporio Armani".

Together with Alexis Dziena, Ryan Donowho and Bennie Slay, he is in a group of actors known as "The Eastsiders" - as they were spotted by casting director Lori Eastside - who was the female lead singer for Kid Creole and the Coconuts, a choreographer for Mick Jagger and was in Get Crazy (1983) with Lou Reed.

Some of the music he likes is early David Bowie, Iggy Pop & The Stooges, Pixies, Operation Ivy, Sonic Youth, Ramones, The Sex Pistols and The White Stripes.

Is the youngest of four children. He has two older sisters, Allison and Stacy, as well as an older brother.

Appeared in the Joey Ramone video, What a Wonderful World, with then-girlfriend Alexis Dziena. [2002]