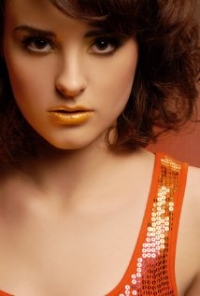 Tiger was born in Dallas, Texas and moved to Austin, Texas with her parents when she was 2 years old. She is surrounded by a family of artists (actors, musicians, writers, designers, craftsmen) and began playing violin when she was 18 months old after watching her older sister, Kitty Stuart (then 5 years old), play violin. At age 4 Tiger began taking Irish Step Dancing, and within a year she was competing against other dancers. Competition and classes occupied much of her free time, and she stopped taking violin lessons in order to focus on her dancing. She quickly became an award-winning dancer, placing first in a number of competitions. When she was 4 or 5 she also began to accompany her mother, Peyton Hayslip, to the theater where her mother was performing in various plays. She learned to make a "cave" under the make-up table and spent hours drawing cartoons and absorbing the life of the theater. When she was 6 she earned her first voice-over gig as the voice of Daphne in Blithe Spirit.... not long after that she was cast in a State Theater Company main stage production of The Tempest as Ariel. Gradually, acting began to take more of her time than dancing, and at the age of 7 realized she'd really rather act than dance. At 8 she was cast as a lead in the indie feature film Yorick (2002) (directed by Johnny Stranger) as Young Hilda. Shortly after completion of that project she was cast in Robert Rodriguez' Spy Kids 2: Island of Lost Dreams (2002), and has been involved in the film industry ever since. She has worked on 3 Rodriguez films now including _Spy Kids 3D : Game Over (2003)_ and The Adventures Of Sharkboy and Lavagirl In 3D (2005)_. Independent short films she has worked on include Matt Robertson's award-winning The Faith of Joey Rail (2005) (for which Tiger received a Special Juried Citation for Acting from Abilene's WESTfest), Iskra Valtcheva's Iris Moon (2007), Harrison Witt's Chickenfüt (2007), and Michelle Herrin's Details. Her voice can be heard in numerous ADV produced anime cartoons including Cosplay Complex, Happy Lesson (2002) and Magical Play.