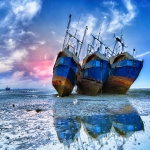 In 100 years, the TV has taken many shapes and sizes. Here's the history of the television, from the 1920s to today.

1920s
The 1920s gave us the mechanical television. The first model had a small display on the right, and a huge cabinet. These first TVs were very simple, in comparison to our technology today.

They implemented peculiar shapes. Such as the octagon television.

Although the technology was impressive, the video