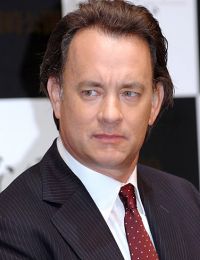 Born in California, Tom Hanks grew up in what he calls a "fractured" family. His parents were pioneers in the development of marriage dissolution law in that state, and Tom moved around a lot, living with a succession of step-families. No problems, no abuse, no alcoholism - just a confused childhood. He had no acting experience in college and, in fact, credits the fact that he couldn't get cast in a college play with actually starting his career. He went downtown, auditioned for a community theater play, was invited by the director of that play to go to Cleveland, and there his acting career started. He met his second wife, actress Rita Wilson on the set of his television show "Bosom Buddies" (1980) - she appeared in one episode in the second season (1981), "Bosom Buddies: All You Need Is Love (#2.7)" (1981). They have two children, and Tom has another son and daughter by his first wife, Samantha Lewes. In 1996, he made his first step behind the camera, directing and writing as well as starring in the film, That Thing You Do! (1996).