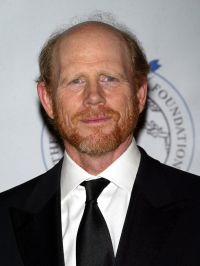 Ron was born in Oklahoma, into an acting family - his father had realized a boyhood dream of acting by attending the University of Oklahoma and majoring in drama, and his mother went through acting school in New York. He was in his first movie at 18 months, Frontier Woman (1956), although his first real part was at the age of 4. Soon a regular on 'Playhouse 90' (1956), he was cast as Opie on 'The Andy Griffith Show' (1960), and later moved from a child in Mayberry to America's teenager as Richie Cunningham in 'Happy Days' (1974). The life of a child star is certainly not routine, but Ron's parents wanted his life to be as normal as possible - he attended public schools and at age 15 even took nine months off to play a basketball season. The transition from child actor to adult actor is always difficult, but for Ron the real transition was from child actor to adult director. There were some film roles, such as The Shootist (1976) for which he received a Golden Globe nomination, but his dream and now his focus was directing. He had begun shooting films at age 15 with a Super-8 camera, and after high school spent two years in a film program at the University of Southern California, but then left, feeling he could learn more from actual experience. That first film was the hardest to finance, but he struck a deal with Roger Corman - he would star in Eat My Dust (1976) and Corman would produce Grand Theft Auto (1977) which Howard would direct (he also wrote the script and starred). It was a success, and his directorial career was jump-started. Married since 1975 to his high school sweetheart, he, in 1997, is enjoying a life of telling stories as one of Hollywood's top directors.