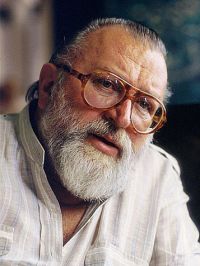 Sergio Leone was virtually born into the cinema - he was the son of Roberto Roberti (aka Vincenzo Leone), one of Italy's cinema pioneers, and actress Bice Valerian. Leone entered films in his late teens, working as an assistant director to both Italian directors and American directors working in Italy (usually making Biblical and Roman epics, much in vogue at the time). Towards the end of the 1950s he started writing screenplays, and began directing after taking over The Last Days of Pompeii (1959) in mid-shoot after its original director fell ill. His first solo feature, The Colossus of Rhodes (1961), was a routine Roman epic, but his second feature, A Fistful of Dollars (1964), a shameless remake of Akira Kurosawa's Yojimbo (1961), caused a revolution. Although it wasn't the first spaghetti Western, it was far and away the most successful, and shot former TV cowboy Clint Eastwood to stardom (Leone wanted Henry Fonda or Charles Bronson but couldn't afford them). The two sequels, For a Few Dollars More (1965) and The Good, the Bad and the Ugly (1966), were shot on much higher budgets and were even more successful, though his masterpiece, Once Upon a Time in the West (1968), in which Leone finally worked with Fonda and Bronson, was mutilated by Paramount Pictures and flopped at the US box office. He directed Duck, You Sucker (1971) reluctantly, and turned down offers to direct The Godfather (1972) in favor of his dream project, which became Once Upon a Time in America (1984). He died in 1989 after preparing an even more expensive Soviet co-production on the World War II siege of Leningrad.