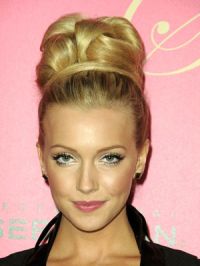 Cassidy started community theater when she was in elementary school. She modeled for Abercrombie and Fitch and Rock and Republic's line in 2004, which helped open the door to an acting career. Her mother, Sherry, would not allow Katie to act professionally until completing her high school education. After high school, Katie was planning to attend NYU's Tisch School of Performing Arts, but instead moved to Los Angeles & landed a number of jobs on popular Hollywood TV shows, including a recurring role as Zoe on 7th Heaven. She then guest-starred in the one-hour drama Sex, Love & Secrets, but the series was canceled after a few episodes. In 2002 she released a single called 'I Think I Love You'. Her 2006 projects included a small role in the horror remake When a Stranger Calls and Click with Adam Sandler. She has also starred in another horror remake, the murderous Christmas classic Black Christmas. She has several films awaiting release.

She filmed scenes for the film remake Revenge of the Nerds, but production was halted and the movie eventually canceled. She completed filming in Paris, where she worked on a film called Taken with Liam Neeson and Maggie Grace. She is scheduled to star in a movie remake of the hit television series Dallas as Lucy Ewing, beating out Lindsay Lohan and Jessica Simpson. Filming for Dallas is scheduled to begin sometime in 2008. Cassidy had a 1 year-deal on The CW's popular drama Supernatural. She also had a small part in Eminem's music video 'Just Lose It' in 2004.

Cassidy was cast as the bride-to-be in new CBS series Harper's Island set to air mid-season in Fall 2008.
Katie was born in Los Angeles, California, the daughter of '70s pop idol David Cassidy and former model Sherry Benedon (née Kaltschnee); the two had an 'on-again, off-again' relationship during the 1970s-1980s, resulting in Katie's birth in 1986, sixteen years after first meeting. Sherry and David remained close friends. Cassidy's paternal grandparents were actors Jack Cassidy and Evelyn Ward. She grew up in Calabasas, California with her mother and stepfather, Richard Benedon, an ER physician. David Cassidy was a part of her life in her younger years, and Katie now has a relationship with David.[citation needed] She has two successful older sisters, Jenna and Jamie. As a child, Cassidy took to tumbling and eventually became a cheerleader for the California Flyers, a competitive team. She cheered as a freshman for Calabasas High School where she attended classes and graduated in 2005. As a child, Cassidy became interested in show business. Her mother, Sherry, allowed Katie to be in community theater, which Katie had a passion for. As a teen Sherry put Katie with a very well respected acting coach and there she flourished. Katie was not allowed to work in the 'industry' except to 'get her feet wet auditioning in preparation for when she graduated high school and could then pursue her career. She did some modeling growing up, ending with a campaign ad for Abercrombie and Fitch in 2004. She is also known for dating two members of former boy band Dream Street, rocker Greg Raposo (2002 - 2003) and popstar & rockstar Jesse McCartney (2004-2007). Raposo's 2003 track 'We're In Love' was written for her 16th birthday; it is also rumored that McCartney's album Right Where You Want Me is about her. Recently, Jesse confirmed that his latest album Departure was written by him about his long love, Katie. He also penned 'Bleeding Love', a huge #1 hit, recorded by Leona Lewis about the emotions he endured when Katie broke up with him early in 2007.