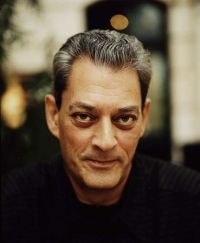 Paul Auster was born in Newark, New Jersey on February 3rd 1947. His father was a landlord, who owned buildings with his brothers in Jersey City. The family was middle-class and the parents' marriage was not a happy one. Auster grew up in the Newark suburbs of South Orange and Maplewood. He read books enthusiastically and developed an interest for writing.

Auster attended high school in Maplewood, some twenty miles southwest of New York City. After his parents' divorce, during his senior year in high school, his mother moved, with his sister and him, to an apartment in the Weequahic section of Newark. Instead of attending his high-school graduation, Auster headed for Europe. He visited Italy, Spain, Paris and naturally James Joyce's Dublin. While he travelled he worked on a novel.

He returned to the United States in time to start at Columbia University in the fall. In early 1966 he began his relationship with Lydia Davis. Davis, who is now also a writer, was at that time attending Barnard College and was a good match for Auster's intellect. In 1967 Auster again left the US to attend Columbia's Junior Year Abroad in Paris. Auster became disillusioned with the dull existence within the programme and quit college. But he was still reinstated at Columbia when he returned to New York.

Auster's undergraduate years at Columbia coincided with a period of social unrest but he didn't participate actively in student politics. He supported himself with a variety of freelance jobs and wrote articles for university magazines. In June of 1969 Auster was granted a B.A. in English and comparative literature. The following year he received his M.A. from Columbia.

A high lottery number saved Auster from having to worry about the Vietnam draft and he took a job with the Census Bureau. During this period he also began work on the novels "In the Country of Last Things" and "Moon Palace", which he would not complete until many years later. In February 1971 Auster left once again for Paris. He supported himself there with a variety of odd jobs and minor literary tasks. He also worked on several film projects, one of them being in Mexico. In 1973 he moved with Davis to Provence where they became caretakers of a farmhouse.

After returning to the US in 1974, Auster has written poems, essays, novels, screenplays and translations. He directed his first motion picture in 1995. He lives in Brooklyn, New York City with his wife and two children.