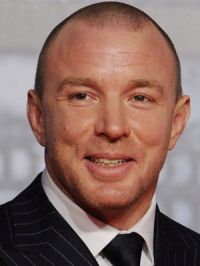 Guy Ritchie was born in Hatfield, Hertfordshire, UK in 1968. After watching Butch Cassidy and the Sundance Kid (1969) as a child, Guy realized that what he wanted to do was to make films. He never attended film school, saying that the work of film school graduates was boring and unwatchable. At 15 years old, he dropped out of school. In 1995, Ritchie got a job as a runner and this proved to be the start of his film career. He quickly progressed and was directing music promos for bands and commercials by 1995. The profits that he made from directing these promos was invested into writing and making the film, The Hard Case (1995), which is a twenty minute short film that is also the prequel to his debut feature Lock, Stock and Two Smoking Barrels (1998). Sting's wife, Trudie Styler, saw The Hard Case (1995) and invested into "Lock, Stock..." (2000), which was written and directed by Guy. Once "Lock, Stock..." (2000) was completed, the hard task of getting it distributed then came about with ten British distributors all turning it down before the film eventually got the attention of Tom Cruise. It was distributed by a North American Distributor, Columbia Tristar. The film was made on a budget of £1.6 million and went on to become the third highest grossing British film of all time. "Lock, Stock..." (2000) was followed up by Snatch. (2000), this time with a bigger budget and a few more familiar faces such as Brad Pitt, Dennis Farina, Benicio Del Toro and with a couple of stars returning from "Lock, Stock..." (2000) such as Jason Statham, Vinnie Jones and Jason Flemyng. It was also a success, taking a record £3 million on its first weekend. Guy married Madonna in December of 2000 shortly after their son, Rocco, was born. After Snatch. (2000), Ritchie's next film was another short called Star (2001/I) , which was for BMW cars. This featured his wife Madonna. Swept Away (2002) was another collaboration with his wife for a remake of the 1974 Lina Wertmüller film of the same name. Swept Away (2002) was not received very well by fans and critics alike when released in America and was released direct to video in Guy's home country of the UK. He has already written his next film, Revolver (2005), slated for a 2005 release.