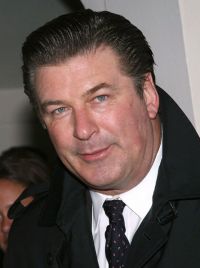 Raven haired, suavely handsome and prolific actor Alec Baldwin was born on April 3, 1958 in Massapequa, New York, and is easily the best known of the four Baldwin brothers in the acting business (the others are Stephen Baldwin, William Baldwin and Daniel Baldwin),. Alec burst onto the TV scene in the early 1980s with appearances in several series, including "The Doctors" (1963) and "Knots Landing" (1979), before scoring feature film roles in Forever, Lulu (1987), _Beetlejuice (1988)_, Working Girl (1988), Married to the Mob (1988) and Talk Radio (1988). In 1990 Baldwin appeared in the first on-screen adaptation of the Jack Ryan character created by mega-selling espionage author Tom Clancy. The film, The Hunt for Red October (1990), was a box office and critical success, with Baldwin appearing alongside icy Sean Connery. Unfortunately, Baldwin fell out with Paramount Studios over future scripts for Jack Ryan, and subsequent Ryan roles went to Harrison Ford.

Baldwin instead went to Broadway to perform "A Streetcar Named Desire", garnering a Tony nomination for his portrayal of Stanley Kowalski (he would reprise the role in a 1995 TV adaptation). Baldwin won over critics as a lowlife thief pursued by dogged cop Fred Ward in Miami Blues (1990), met his future wife Kim Basinger while filming the Neil Simon comedy The Marrying Man (1991), starred in the film adaptation of the play Prelude to a Kiss (1992) (in which he starred off-Broadway), and made an indelible ten-minute cameo as a hard-nosed real estate executive laying down the law in Glengarry Glen Ross (1992). He also made a similar tour-de-force monologue in the thriller Malice (1993), as a doctor defending his practices, in which he stated, "Let me tell you something: I am God."

Demand for Baldwin's talents in the 1990s saw more scripts swiftly come his way, and he starred alongside his then wife Kim Basinger in a remake of the Steve McQueen action flick The Getaway (1994), brought to life the famous comic strip character The Shadow (1994), and starred as an assistant district attorney in the civil rights drama Ghosts of Mississippi (1996). Baldwin's distinctive vocal talents then saw him voice US-aired episodes of the highly popular UK children's show "Thomas the Tank Engine & Friends" (1984), plus later voice-only contributions to other animated/children's shows including "Clerks" (2000), Cats & Dogs (2001), Final Fantasy: The Spirits Within (2001) and The SpongeBob SquarePants Movie (2004).

In the early 2000s, Baldwin and Basinger endured an acrimonious break-up that quickly became tabloid fodder, but while his divorce was high-profile, Baldwin excelled in a number of lower-profile supporting roles in a variety of films, including State and Main (2000), Pearl Harbor (2001), The Cooler (2003) (for which he received an Academy Award nomination for Best Supporting Actor), The Aviator (2004), Along Came Polly (2004), and The Departed (2006). As he was excelling as a consummate character actor, Baldwin found a second career in television comedy. Already known for his comedic turns hosting "Saturday Night Live", he essayed an extended guest role on "Will & Grace" (1998) in 2005 before taking on what would arguably become his most famous role, that of network executive Jack Donaghy opposite Tina Fey in the highly acclaimed sitcom "30 Rock" (2006). The role brought Baldwin two Emmy Awards, three Golden Globes, and an unprecedented six Screen Actors Guild Awards (not including cast wins).

Continuing to appear in films as "30 Rock" wrapped up its final season, Baldwin remarried in 2012 to Hilaria Lynn Thomas, and is rumored to be considering political office.