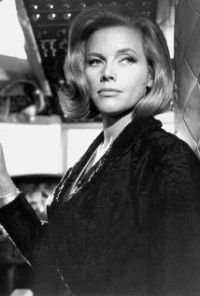 Chosen by Empire magazine as one of the 100 Sexiest Stars in film history (#51).
23 June 1962: Filmed her first The Avengers (1961) episode, The Avengers: Death Dispatch (1962).
20 March 1964: Filmed her final The Avengers (1961) episode, The Avengers: Lobster Quadrille (1964).
Education: Guildhall School of Music and Drama, London, England
Honor is involved with an organization called Fairtrade, which aims to ensure that third world producers get treated fairly and can make a living from their work.
Credits her father for her acting career because on her fifteenth birthday he offered her a choice - a bicycle or elocution classes. She chose the classes.
She allegedly declined a Commander of the British Empire (CBE) honour in 2002.
Extensively studied judo while starring in The Avengers (1961). Became so proficient with the martial art, she performed many of her own stunts.
Was 38 when she appeared in _Goldfinger (1964)_, making her the oldest actress to play a Bond girl.
Has 2 adopted children with her 2nd husband Maurice Kaufmann - a daughter named Lottie Kaufmann (b.1967) and a son named Barnaby Kaufmann (b.1968).
Her brother Ken died at age 35.
Was previously a supporter of the Liberal Party of Great Britain. Since 2007, had been a supporter of the Liberal-Democrat Party of Great Britain.