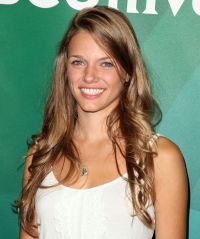 Spiridakos was born in Winnipeg, Canada to Greek-born parents, George and Anastasia Spiridakos, who are restaurant owners.[1] She has two brothers.[3] The family moved to the Greek village Skala, near Sparta, when she was four, and returned to Canada when she was nine.[4][5] She strongly identifies with her Greek heritage.[6]

Spiridakos began acting in junior high school, and studied at the Actors Training Centre of Manitoba.[7] She graduated from Oak Park High School in Winnipeg, and then moved to Vancouver in 2007 to pursue acting.[8] She landed her first television role within weeks.[3] Spiridakos continued to work in television, with walk-on and recurring roles on Bionic Woman, Supernatural, The L Word, Hellcats, Psych, Being Human, and the TV movie Goblin.[2]

In 2009, she won her first starring role in the Canadian Teletoon series Majority Rules!, playing 15-year-old Becky Richards.[7] She made her feature film debut in 2011's Rise of the Planet of the Apes.[3] In mid-2012, Spiridakos landed a lead role on the NBC television series Revolution as Charlie Matheson, a survivalist in a dystopian future civilization.[1] She auditioned for the role while attending her first pilot season in Los Angeles. Spiridakos shot the pilot in Atlanta, and continued filming the series in rural Wilmington, North Carolina.[8]