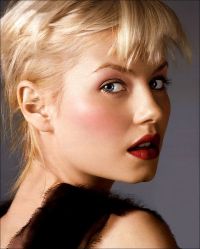 Cuthbert was born in Calgary, Alberta, Canada, the daughter of Patricia, a homemaker, and Kevin, an automotive design engineer. She has two younger siblings, Jonathan and Lee-Ann, and she grew up in Greenfield Park, near Montreal, Quebec. In 2000, she graduated from Centennial Regional High School and moved to Los Angeles at the age of 17 to pursue an acting career.
When she was nine, Cuthbert started modeling for various lines of children's clothing and also became a foot model.[2] She made her first televised appearance as an extra in the horror-themed series for children Are You Afraid of the Dark?; she later became a series regular. Cuthbert also co-hosted Popular Mechanics for Kids, which was filmed in Montreal. Her reporting captured the attention of then–First Lady Hillary Clinton, who invited her to visit the White House.

Cuthbert landed her first role in a feature film in the family drama Dancing on the Moon (1997). She appeared in several other Canadian family-themed movies and an airplane thriller, Airspeed. Cuthbert starred in the Canadian television movie Lucky Girl in 2001 and was awarded a Gemini Award for her performance.

Soon after her move to Los Angeles, Cuthbert was cast in the role of Kim Bauer, daughter of federal agent Jack Bauer in the television series 24. She appeared in the show's first three seasons, but not in its fourth; she guest-starred in only two episodes in the fifth season. She also reprised her role as Kim Bauer in 24: The Game and again guest-starred in five episodes of the seventh season.
Cuthbert, who enjoys painting, is an ice hockey fan and Los Angeles Kings season-ticket holder. In 2005, she maintained a blog on the NHL website, though she did not post for most of the season. She was once involved romantically with then-Los Angeles Kings player Sean Avery, and she is now dating Dion Phaneuf of the Calgary Flames. Her relationship with the latter two hockey players turned into a minor scandal when her ex-boyfriend, Avery, told a Canadian reporter in December 2008, "I'm really happy to be back in Calgary. I love Canada and I just wanted to comment on how it's become a common thing for guys in the NHL to fall in love with my sloppy seconds, I don't know what that's about." Avery was suspended six games for the remarks, and was not invited to rejoin his team, the Dallas Stars, following his suspension.