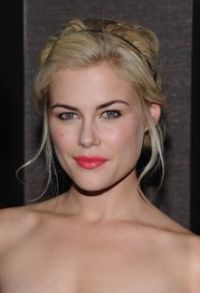 Originally from Launceston, Tasmania, Taylor attended Riverside High School. Taylor has always wanted to be an actress since she was little performing in many school plays.
Taylor modeled for Skye-Jilly International and competed successfully in the State finals of Miss Teen Tasmania and Miss Universe/Miss World. She has appeared in a number of United States productions – such as television movies about Natalie Wood and the making of Dynasty (where she played Catherine Oxenberg),and the horror movies Man-thing and See No Evil. She played Sasha Forbes on the short-lived Australian drama series headLand. On 3 April 2006 it was announced that she had been nominated for a Logie Award for Most Popular New Female Talent for her role on headLand.
Taylor had a supporting role in Transformers, but turned down reprising the role in Transformers: Revenge of the Fallen, saying 'I don't think I'd wanna do it to be honest, and not for any particular reason other than the fact that I've done it.'. In 2008, she starred in the independent film Bottle Shock, as well as the remake Shutter.
In 2009, she starred in the comedy Splinterheads as well as the HBO comedy series Washingtonienne