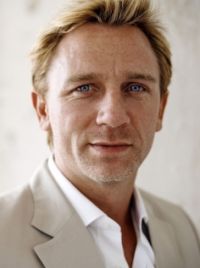 Throughout his early career, Daniel Craig enjoyed the anonymity that comes with not being an A-list actor. That changed, however, when it was announced that he was considered for the role of James Bond in the adaptation of Ian Flemings’ Casino Royale. Craig denied rumors that he was offered a three-picture deal—at the time, Pierce Brosnan was still in the running to continue his reign as the famed British agent. But rumors were enough to blow the lid off Craig’s obscurity and thrust the actor known to loathe publicity into the limelight, especially after he did indeed become the sixth actor to play 007. Even if he weren’t considered for the role, his increasingly high-profile work would have made him a star regardless.

Born in Chester—England’s walled city—Craig grew up in nearby Liverpool, where his mother studied art at university and his stepfather, the painter Max Blond, plied his craft. At 16, he moved to London to train at the National Youth Theatre and later graduated from the Guildhall School of Music and Drama. In 1992, Craig made his film debut in the coming-of-age drama, “The Power of One,” wherein he played an Afrikaner soldier who beats and humiliates a white South African boxer (Stephen Dorff) trained by a black man (Morgan Freeman). Craig then appeared in “Genghis Cohn” (A&E, 1993), a satire about a Nazi SS officer (Robert Lindsay) confronted with the ghost of a Jewish comedian (Antony Sher) he killed in a concentration camp. After playing a commoner involved in a forbidden love with King Arthur’s daughter in the children’s fantasy, “A Kid in King Arthur’s Court” (1995), Craig gained fame in native England playing a hapless musician turned homeless person in the BBC’s “Our Friends in the North” (1996), an ambitious nine-part serial about the lives of four friends spanning thirty years.

In the PBS adaptation of Daniel Defoe’s “Moll Flanders” (1996), he played the enterprising bride’s one true love. He next appeared in the romantic thriller, “Obsession” (1997), wherein he was one of several characters whose divergent lives cross in Berlin. The period biopic, “Love is the Devil” (1998), offered him an opportunity to expand his range. Playing petty thief George Dyer, renowned painter Francis Bacon’s lover and artistic inspiration, Craig earned critical kudos in a film otherwise subjected to mixed reviews. A return to PBS in “The Ice House” (1998) found Craig playing an assistant investigator who doubts the Chief Inspector’s conclusion that a recently discovered corpse is the dead husband of a woman previously suspected in his disappearance. That same year, he appeared in “Elizabeth,” the widely acclaimed historical biopic starring an Oscar-snubbed Cate Blanchett as the Virgin Queen.

After landing major roles in smaller projects—the World War I drama “The Trench” (1999) and the late 19th century drama “Love and Rage” (also 1999)—Craig earned a British Independent Film Award for Best Actor for his portrayal of a schizophrenic man adjusting to the real world after his release from an institution in “Some Voices” (2000). He next appeared in a supporting role in the bland and uninspired romantic adventure, “I Dreamed of Africa” (2000), starring a well-meaning Kim Basinger. Craig then made the jump to larger Hollywood fare, appearing as old flame and fellow tomb raider Alex West in the live-action take on the popular video game, “Lara Croft: Tomb Raider” (2001), starring Angelina Jolie. In “Road to Perdition” (2002), he was the angry son of an Irish mobster (Paul Newman) who treats one of his hit men (Tom Hanks) like the son he never had. He next played poet Ted Hughes, husband to feminist icon Sylvia Plath (Gwyneth Paltrow), who committed suicide after he left their deteriorated marriage, in the uneven biopic, “Sylvia” (2003).

Craig caused a stir in the unsettling erotic drama, “The Mother” (2004), playing a man who beds a woman (Anne Reid) twice his age while sleeping with her daughter. The stark May-December romance earned rave reviews, but made little impression at the box office. After a stint as a university professor stalked by another man (Rhys Ifans) in the Hitchcockian “Enduring Love” (2004), he was an inmate at an institute for the criminally insane in the derivative thriller, “The Jacket” (2005). Meanwhile, the Bond rumors began to swirl amidst the pending release of “Layer Cake” (2005), a crime comedy from Matthew Vaughn, producer of “Snatch” (2001) and “Lock, Stock and Two Smoking Barrels” (1999). Craig played a cocaine dealer seeking early retirement who’s forced by a crime boss to find the missing daughter of an old pal. Meanwhile, Craig was cast by Steven Spielberg to star in “Munich” (2005), the true story of the massacre of Israeli athletes by Palestinian terrorists at the 1972 Olympics and the secret Mossad mission to exact revenge, delivering a razor-edged performance as the one member of the team who whole-heartedly embraces the righteousness of their mission.

Just prior to the release of “Munich” and after months of speculation, Craig was officially revealed as the next James Bond in October 2005, becoming only the second British actor to play the role, though he did hold the distinction of being the first blonde. Initially, Craig was greeted with concern—and in some corners outright scorn—from critics, who felt his shorter stature (he was under 6-feet tall) and golden locks went against author Ian Fleming’s original vision of the character. Adding injury to insult, Craig reportedly lost two teeth while filming a fight scene, but it turned out that he had simply lost a crown. Nonetheless, the media hounds enjoyed their continued snipping at the actor’s heels. But when “Casino Royal” (2006) was released, critics suddenly changed their tune, stating that the film was one of the best in years and that Craig rivaled Sean Connery with his complex and in-depth take on the Bond character. Meanwhile, Craig starred opposite Nicole Kidman in “The Visiting” (2007), a fourth film adaptation of Jack Finney’s Invasion of the Body Snatchers.