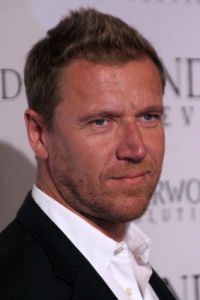 Born in 15 March 1959 as Renny Lauri Mauritz Harjola, he is the most successful Finnish film director in the history of Hollywood.

Harlin started his career in film business in the beginning of 1980s when he was directing commercials and company films for company's like Shell. Later he worked as a buyer for Finnish film distributor and met Finnish Markus Selin in Los Angeles. They became friends and started writing a screenplay called "Arctic Heat". The project started fast and soon they had Chuck Norris signed on leading role for the film. But with money problems shooting schedule didn't hold and Norris left the project, but Selin and Harlin got Mike Norris for the leading role. They wrote new script, Born American (1986), and got financial help from USA. In the year 1986 Born American (1986) was finished and the most expensive Finnish film ever opened in USA in over 1,000 theaters and reached no 9.

The film wasn't successful in Finland, where it was banned. Harlin moved to Los Angeles and got a job from _Halloween_ producer Irwin Yablans who offered him script of "Prison" to film. Film was made with low budget and distributed with only 42 copies. In the same year 1988 he got a job from New Line Cinema to direct A Nightmare on Elm Street 4: The Dream Master (1988) after meeting producer Robert Shaye numerous times, who at the first didn't want Harlin to direct the film. It became the highest-grossing film in the series, though its budget was seven times greater than the original "A Nightmare on Elm Street" film.

20th Century Fox wanted Harlin to direct the Andrew Dice Clay rock'n roll comedy The Adventures of Ford Fairlane (1990) and also a sequel to Die Hard (1988). Harlin made the both, but only Die Hard 2 (1990) was commercially successful, with over 239 million dollar worldwide gross. Next he directed Cliffhanger (1993) with Sylvester Stallone which made $255 million worldwide and was nominated for 3 Oscar's. Before Cliffhanger (1993) Harlin was hired to direct "Alien³" but he left the project because of creative differences.

His next film Cutthroat Island (1995) was a pirate film made with $100 million budget. Unfortunately it came out without good promotion and flopped badly. It made only $10 million in USA and for a time became the biggest flop in Hollywood history. But for Harlin, it wasn't a total loss.

The Long Kiss Goodnight (1996) was a critical success, but was a box office flop, grossing only $30 million domestically with a $65 million budget.

In year 1998, Warner Bros. wanted a summer blockbuster for the year 1999 and Renny Harlin was the right name to direct. Deep Blue Sea (1999) came to theaters after costing 60 million dollars to film and made $160 million worldwide. The film never hit the top spot in the USA but still grossed $73 millions in the USA alone.

Harlin was hired to direct Exorcist: The Beginning (2004) after John Frankenheimer left the job and died shortly after it, and Paul Schrader was fired. Producers knew that Harlin could made a blockbuster even with the weak script, and so he did. With $50 million budget the film opened in number 1 and grossed $80 million worldwide.

Probably most liked Harlin's film Mindhunters (2004) was released in 2004 after years post-production. It was released in USA in 2005 in over 1,000 theaters but it only reached 10th place. In 9 weeks it grossed only $4 million dollars.

The Covenant (2006) was released in 2006. With non-famous (but attractive) actors, the film hit the top in its opening weekend and became a successful film. With a $20 million budget, it grossed $37 million worldwide and DVD sale brought $20 million more.