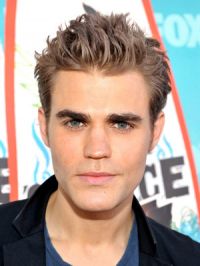 Paul was raised in the Marlboro, New Jersey. His parents are Polish and many of his relatives live in Poland. Until the age of 16, he spent 4 months of every year in Poland. He has 3 sisters, two younger and one older. His eldest sister is an attorney.

Paul attended the Christian Brothers Academy as well as Marlboro High School. He was expelled from the first school for getting into fights. It was his troubled youth that led him towards acting. He was forced by a teacher to do a school play, when he was in the third grade, but found acting a safe haven. Whilst in his junior year at Marlboro, he landed the role of Max in "Guiding Light" (1952). Due to his acting schedule, he transferred schools to Lakewood Prep school. He graduated in 2000. He went on to Rutgers University but, because he was being offered roles, he decided to quit after one semester.

His breakthrough role came in "The Vampire Diaries" (2009). He auditioned for both the roles of Damon, the bad vampire brother, and Stefan, the good vampire brother. But they decided he would work better as Stefan.

He currently resides in Los Angeles and Atlanta, where he continues filming on 'The Vampire Diaries'.