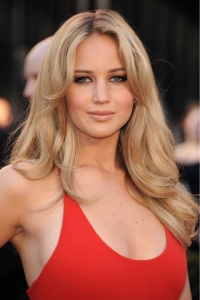 Academy Award Winning Actress Jennifer Lawrence, best-known for playing Katniss Everdeen in The Hunger Games (2012), was born in Louisville, Kentucky on August 15, 1990. Her career began when she spent a Summer in Manhattan at the age of 14. During that time, she scored some small commercial and film roles, and shortly thereafter her family moved to Los Angeles so she could further pursue her dream. She was cast in the TBS sitcom The Bill Engvall Show (2007), and in smaller movies like The Poker House (2008) and The Burning Plain (2008).

Her big break came when she played Ree in Winter's Bone (2010), which landed her Academy Award and Golden Globe nominations. Shortly thereafter, she secured the role of Mystique in franchise reboot X-Men: First Class (2011), which went on to be a hit in Summer 2011. Around this time, Lawrence scored the role of a lifetime when she was cast as Katniss Everdeen in the big-screen adaptation of literary sensation The Hunger Games (2012). That went on to become one of the highest-grossing movies ever with over $407 million at the domestic box office, and instantly propelled Lawrence to the A-list among young actors/actresses. Three Hunger Games sequels are scheduled for release in November 2013, 2014, and 2015, with Lawrence reprising her role at least for the first one (The Hunger Games: Catching Fire (2013)). In 2012 the romantic comedy Silver Linings Playbook earned her the Academy Award, Golden Globe Award, Screen Actors Guild Award, Satellite Award and the Independent Spirit Award for Best Actress, amongst other accolades, making her the youngest person ever to be nominated for two Academy Awards for Best Actress and the second-youngest Best Actress winner