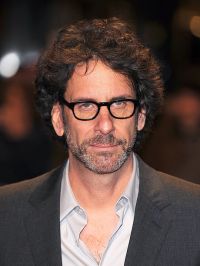 His movies often have a victim of a crime who is completely unsympathetic (Fargo, Lebowski, Raising Arizona)

Men often explicitly suffer bizarre and bloody deaths or indignities in their films, but women are typically harmed off-screen (Fargo, The Big Lebowski, No Country for Old Men, Barton Fink).

Use of phones ringing for long periods of time before a character answers of at all. Tom Reagan in Millers Crossing, The Dude in The Big Lebowski, Anton Chigurh in No Country For Old Men.

Elaborate, self-conscious homages to past films and filmmaking styles

Often begins movies with a voiceover by a southern character (see: Blood Simple, The Hudsucker Proxy, The Big Lebowski, No Country for Old Men).

Highly keen soundtracks (always handled by Skip Lievsay), in which mundane sounds are made to seem eerie or used for absurdist effect.

Often has at least one male character with dated, unusual, or goofy hair