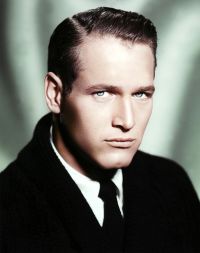 Screen legend, superstar, and the man with the most famous blue eyes in movie history, Paul Newman was born in 1925 in Cleveland, Ohio, the son of a successful sporting goods store owner. He acted in grade school and high school plays and after being disharged from the navy in 1946 enrolled at Kenyon College. After graduation he spent a year at the Yale Drama School and then headed to New York, where he attended the famed New York Actors Studio. Classically handsome and with a super abundance of sex appeal, television parts came easily and, after his first Broadway appearance in 'Picnic' (1953), he was offered a movie contract by Warner Brothers. His first film, The Silver Chalice (1954) was nearly his last. He considered his performance in this costume epic to be so bad that he took out a full-page ad in a trade paper apologizing for it to anyone who might have seen it. He fared much better in his next effort, Somebody Up There Likes Me (1956), in which he portrayed boxer Rocky Graziano and drew raves from the critics for his briliant performance. He went on to become one of the top box office draws of the 1960s, starring in such superior films as The Hustler (1961), The Prize (1963), Hud (1963), Cool Hand Luke (1967) and Butch Cassidy and the Sundance Kid (1969). He also produced and directed many quality films, including Rachel, Rachel (1968) in which he directed wife Joanne Woodward and which received an Oscar nomination for best picture. Nominated nine times for a best actor Oscar, he finally took one home for his performance as an aging pool shark in The Color of Money (1986). Though well into his 70s as the century drew to a close, Newman still commanded lead roles in films such as Message in a Bottle (1999). He lives with his wife in Westport, Connecticut. A caring and supremely generous man, he is the founder of 'Newman's Own' a successful line of food products that has earned in excess of 0 million, every penny of which the philanthropic movie icon has donated to charity. Renowned for his sense of humor, in 1998 he quipped that he was a little embarrassed to see his salad dressing grossing more than his movies.