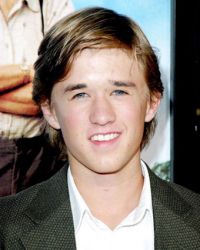 American child actor who at this writing (2000) has proven himself perhaps the best young actor of his generation. The son of actor Eugene Osment and teacher Theresa Osment, Haley was chosen for a commercial at age four after a casting director spotted him in a furniture store with his parents. Within months, he had landed a small but memorable role as Tom Hanks's son in Forrest Gump (1994) and a starring role as Edward Asner's grandson on the TV series "Thunder Alley" (1994). His comedy skills were manifest very young, and he followed "Thunder Alley" (1994) with two more sitcoms. Norman Jewison gave him his first leading role on the big screen in Bogus (1996), and he proved completely at ease in this dramatic role. However, it took the smash hit The Sixth Sense (1999) to brand the young actor on the public consciousness. His devastating performance as the haunted Cole Sear brought him an Oscar nomination at age 11 and a memorable tribute at the awards from winner Michael Caine: "Once I learned of your nomination and saw your performance, I knew for sure you would win." Since then, Osment has given an equally powerful performance in Pay It Forward (2000). Along with bravura performances, he has developed an equal reputation in the industry for unspoiled professionalism. His younger sister, Emily Osment, has made several impressive film and television appearances as well.