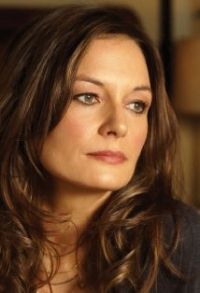 A flawless English beauty with flashing blue eyes, Catherine McCormack quickly rose to prominence after her portrayal of Murron, the doomed sweetheart of William Wallace, in Mel Gibson's Oscar-winning epic 'Braveheart' (1995). This native of Alton trained at the Oxford School of Drama where she began to hone her craft in stage productions of classical and contemporary work. She segued to the small screen where she was featured in Anna Campion's 'In the Woods'. The director chose McCormack for the pivotal role of a neurotic student in the ensemble of 'Loaded/Bloody Weekend' (1994; released in the USA in 1996). While her role in 'Braveheart' was ornamental at best, McCormack lent charm and charisma to the part. Audiences were impressed by her flowing hair and preternatural attractiveness rather than her acting ability. Similarly, 'North Star' (1996), a little-seen adventure in which she played the kidnapped mistress of an Alaskan gold prospector, wasted her talents in an underwritten role where she was required to look good and act feisty.

Her first leading role in 'Dangerous Beauty' (1998), as a 16th Century woman who, when spurned by her true love, becomes a courtesan seemed on paper to further typecast the actress for her appearance. It certainly didn't hurt that she looked at home in the sumptuous period costumes, but McCormack crafted more than just a surface portrayal, mining the character for its wit, passion and power. Completely believable as a desired object of beauty (despite her protests of 'I'm quite a gangly, awkward person'), she successfully carried the picture, although audiences and critics offered a rather cool reception. McCormack was once again better than her material playing a WWII-era girl attempting to stay true to her fiance in 'Land Girls' (1998). Finally, in 'Dancing at Lughnasa' (also 1998), she had a role worthy of her. As the unwed mother Christina, the youngest in a family of five sisters in 1930s Ireland, McCormack delivered a beautifully nuanced portrait of a romantic torn between her love for a dashing Welshman and her duty to her family. Returning to more contemporary times, she appeared alongside Kathy Burke, Jennifer Ehle, Dougray Scott and Douglas Henshall in the relationship comedy-drama 'This Year's Love' (1999).