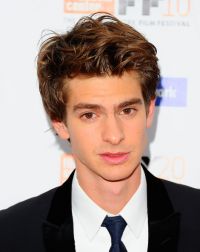 Andrew Garfield was born in Los Angeles, to an American father, Richard, and a British mother, Lynn. When he was age 3, he moved to Surrey, U.K., with his parents and older brother. He went to a private school (known as a "public" school in England), the City of London Freemen's School. Andrew began acting in youth theatre productions while he was still at school. At age 19, he went to the Central School of Speech and Drama.

His first professional roles were on the stage and in 2005 he made his TV debut in the Channel 4 teen series "Sugar Rush" (2005/I) in the UK. More TV work followed (reaching a wider UK audience in a two-part story in the third season of "Doctor Who" (2005)), as well as a number of movie appearances. Garfield played Eduardo in The Social Network (2010) and Tommy in Never Let Me Go (2010), two films that brought him to full international attention. That same year, he joined the growing roster of non-Americans to be cast as superheroes when he was announced as the lead in what was then known as "Untitled Spider-Man Reboot" and which became The Amazing Spider-Man (2012).