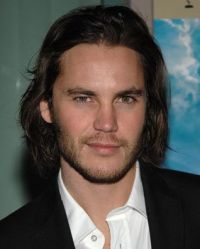 On "Friday Night Lights" (2006), the Emmy-nominated series USA Today called "one of the best-acted, best-written, best-produced shows on television", Kitsch stars as the strong, brooding backbone of the Dillon Panthers football team. He brings a poignancy and vulnerability to the role of a Texas high school fullback struggling to find his identity and wrestling with his demons by way of the bottle. Executive-produced by actor-director Peter Berg, based on his hit Universal Pictures feature, Friday Night Lights (2004), the second season of "Friday Night Lights" premiered on October 5, 2007.

During the show's summer hiatus, Taylor filmed the feature, Gospel Hill (2008), alongside Julia Stiles, Danny Glover, Angela Bassett and Samuel L. Jackson. Directed by Giancarlo Esposito, the film focuses on the bigoted former sheriff of a southern town and a one-time civil rights worker whose intersecting lives are still haunted by events that took place decades earlier. Old wounds are reopened as residents of a black neighborhood are forced out of their homes to make way for a multi-million dollar development.

Kitsch got serious about acting in 2002, when he moved to New York City to study with renowned acting coach Sheila Grey. His career took off the next year after he returned to his home town of Vancouver and landed his first film major role, alongside Samuel L. Jackson, in David R. Ellis' adrenaline-fueled action picture, Snakes on a Plane (2006). The film was released in August 2006 by New Line Cinema.

Then, Kitsch starred as prep school student "Pogue Perry" in director Renny Harlin's The Covenant (2006), which opened at No. 1 on the box office chart in September 2006. In the stylish thriller from Lakeshore Entertainment and Sony Screen Gems, four young witches do battle with a powerful, centuries-old supernatural force.

When he's not on set, Kitsch pursues children's charity work and enjoys spending time with family and friends.