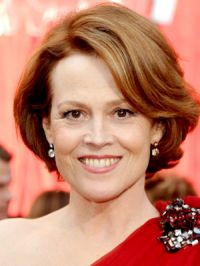 Sigourney Weaver was born Susan Alexandra Weaver in Leroy Hospital in New York City. Her father, TV producer Sylvester L. Weaver Jr., originally wanted to name her Flavia, because of his passion for Roman history (he had already named her elder brother Trajan). Her mother, Elizabeth Inglis, was a British actress who had sacrificed her career for a family. Sigourney grew up in a virtual bubble of guiltless bliss, being taken care by nannies and maids. By 1959, the Weavers had resided in 30 different households. In 1961, Sigourney began attending the Brearley Girls Academy, but her mother moved her to another New York private school, Chapin. Sigourney was quite a bit taller than most of her other classmates (at the age of 13, she was already 5' 10"), resulting in her constantly being laughed at and picked on; in order to gain their acceptance, she took on the role of class clown.

In 1962, her family moved to San Francisco briefly, an unpleasant experience for her. Later, they moved back east to Connecticut, where she became a student at the Ethel Walker School, facing the same problems as before. In 1963, she changed her name to "Sigourney", after the character "Sigourney Howard" in F. Scott Fitzgerald's "The Great Gatsby" (her own birth name, Susan, was in honor of her mother's best friend, explorer Susan Pretzlik). Sigourney had already starred in a school drama production of "A Midsummer Night's Dream", and, in 1965, she worked during the summer with a stock troupe, performing in "A Streetcar Named Desire" and "You Can't Take It With You" (she didn't star in the latter because she was taller than the lead actor!). After graduating from school in 1967, she spent some months in a kibbutz in Israel. At that time, she became engaged to reporter Aaron Latham, but they soon broke up.

In 1969, Sigourney enrolled in Stanford University, majoring in English Literature. She also participated in school plays, especially Japanese Noh plays. By that time she was living in a tree house, alongside a male friend, dressed in elf-like clothes! After completing her studies in 1971, she applied for the Yale School of Drama in New Haven. Despite appearing at the audition reading a Bertolt Brecht speech and wearing a rope-like belt, she was accepted by the school but her professors rejected her, because of her height, and kept typecasting her as prostitutes and old women (whereas classmate Meryl Streep was treated almost reverently). However, in 1973, while making her theatrical debut with "Watergate Classics", she met up with a team of playwrights and actors and began hanging around with them, resulting in long-term friendships with Christopher Durang, Kate McGregor-Stewart and Albert Innaurato.

In 1974, she starred in such plays as Aristophanes' "Frogs" and Durang's "The Nature and Purpose of the Universe" and "Daryl and Carol and Kenny and Jenny", as "Jenny". After finishing her studies that year, she began seriously pursuing a stage career, but her height kept being a hindrance. However, she continued working on stage with Durang (in "Titanic" [1975]) and Innaurato (in "Gemini" [1976]). Other 1970s stage works included "Marco Polo Sing a Song", "The Animal Kingdom", "A Flea in Her Ear", "The Constant Husband", "Conjuring an Event" and others. However, the one that really got her noticed was "Das Lusitania Songspiel", a play she co-wrote with Durang and in which she starred for two seasons, from 1979 to 1981. She was also up for a Drama Desk Award for it. During the mid-70s, she appeared in several TV spots and even starred as "Avis Ryan" in the soap opera "Somerset" (1970).

In 1977, she was cast in the role Shelley Duvall finally played in Annie Hall (1977), after rejecting the part due to prior stage commitments. In the end, however, Woody Allen offered her a part in the film that, while short (she was on-screen for six seconds), made many people sit up and take notice. She later appeared in Madman (1978) and, of course, Alien (1979). The role of the tough, uncompromising "Ripley" made Sigourney an "overnight" star and brought her a British Award Nomination. She next appeared in Eyewitness (1981) and The Year of Living Dangerously (1982), the latter being a great success in Australia that won an Oscar and brought Sigourney and co-star Mel Gibson to Cannes in 1983. The same year she delivered an honorary Emmy award to her father, a few months before her uncle, actor Doodles Weaver, committed suicide. That year also brought her a romance with Jim Simpson, her first since having broken up two years previously with James M. McClure. She and Simpson were married on 1 October 1984. Sigourney had, meanwhile, played in the poorly received Deal of the Century (1983) and the mega-hit Ghostbusters (1984). She was also nominated for a Tony Award for her tour-de-force performance in the play "Hurly Burly". Then followed One Woman or Two (1985), Half Moon Street (1986) and Aliens (1986). The latter was a huge success, and Sigourney was nominated for both a Golden Globe and an Oscar.

She then entered her most productive career period and snatched Academy Award nominations, in both Best Actress and Best Supporting Actress categories, for her intense portrayal of Dian Fossey in Gorillas in the Mist (1988) and her delicious performance as a double-crossing, power-hungry corporate executive in Working Girl (1988). She ended up losing in both, but made up for it to a degree by winning both Golden Globes. After appearing in a documentary about fashion photographer Helmut Newton, Helmut Newton: Frames from the Edge (1989), and reprising her role in the sequel Ghostbusters II (1989), she discovered she was pregnant and retired from public life for a while. She gave birth to her daughter, Charlotte Simpson, on 13 April 1990, and returned to the movies as a (now skinhead) Ripley in Alien³ (1992) and a gorgeous "Queen Isabella of Spain" in 1492: Conquest of Paradise (1992), her second film with director Ridley Scott. She starred in the political comedy Dave (1993) alongside Kevin Kline, and then a Roman Polanski thriller, Death and the Maiden (1994).