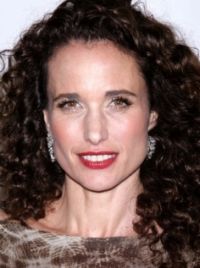 A Southern belle who's seemingly pure, virtuous, farm-girl sexy and city-woman sophisticated all at the same time, Andie MacDowell has persevered in an industry that wanted to write her off from the start. The model-turned-actress made her feature debut as Jane in 'Greystoke: The Legend of Tarzan, Lord of the Apes' (1984), suffering the indignity of having her inappropriate Southern accent dubbed over by Glenn Close. Writers like critic John Simon, who labeled her 'that horse-faced pseudo-sultry jeans model . . . who cannot act and cannot even read lines', had a field day, but MacDowell dug in rather than quit. Using her own voice for Joel Schumacher's brat-pack flick 'St. Elmo's Fire' (1985), she began demonstrating that some models were more than just skin deep. Her dead-on portrayal of the sexually repressed wife of Peter Gallagher in the acclaimed 'sex, lies and videotape' (1989), winner of the Palme d'Or at Cannes that year, earned her several Best Actress prizes but no Oscar nomination, an oversight deemed 'incomprehensible' by The New York Times.
In the 1990s, MacDowell hit her stride in light, entertaining fare, giving touching performances with her patented down-home charm in 'Green Card' (1990), opposite Gerard Depardieu, and 'The Object of Beauty' (1991), in which she played a spoiled socialite more in love with her Henry Moore statue than boyfriend John Malkovich. MacDowell's considerable charisma also enabled her to escape unscathed from the notorious bomb 'Hudson Hawk' (1991). That same year, she delivered a tour-de-force performance in a segment of HBO's 'Women and Men II' entitled 'A Domestic Dilemma', playing the embittered alcoholic wife of Ray Liotta, a part that was radically different from her preceding nice-girl roles. Similarly, her distraught mother of a hospitalized little boy was one of the highlights of Robert Altman's panoramic 'Short Cuts' (1993). The perfect foil for Bill Murray's smug TV weatherman in the popular romantic-comedy 'Groundhog Day' (1993), MacDowell enjoyed another whimsical success opposite Hugh Grant in the surprise blockbusting English import 'Four Weddings and a Funeral' (1994), though many underestimated her as 'window dressing' on both and gave all the credit to her co-stars.

'Bad Girls (1994), a quasi-feminist but shallow revisionist Western (1994) was a troubled project she admittedly took for the money and one that did not add a degree of toughness to McDowell's airy charm, but she was luminous as an adored mother stricken with cancer in Diane Keaton's comedy-drama 'Unstrung Heroes' (1995) and as Michael Keaton's confused wife in 'Multiplicity' (1996), a project which rejoined her with 'Groundhog Day' director Harold Ramis. She fared less well as a mysterious but sassy woman claiming to be an 'angel expert' in 'Michael' (also 1996) and as Bill Pullman's unhappy wife in Wim Wenders' 'The End of the Violence' (1997). Although 'Shadrach' seemed a perfect opportunity to stretch playing Southern white trash, the weak script and slack helming by first-time director Susanna Styron (adapting her father William's story) only offered her as unglamorous, and a problematic script also doomed her debut as executive producer of 'Just the Ticket' (both 1998), in which she co-starred opposite producer Andy Garcia but failed to exhibit the charm and charisma of her best work.
MacDowell realized her dream of acting with Miss Piggy in 'Muppets from Space' and was the supportive, eagerly accommodating Hollywood wife of blocked screenwriter Albert Brooks in Brooks' comedy 'The Muse' (both 1999). 'Town & Country' (2000), which rejoined her with Diane Keaton (this time as an actor), again signaled a change from the glowingly gentle, sweet women she has played best. She assessed what makes the role so juicy for Biography Magazine, (March 2000): 'I lie a lot. I get to wear amazing clothes, and I sleep with Warren Beatty.' MacDowell also acted in 'Harrison's Flowers' (lensed 1999-2000), about a woman who travels to Yugoslavia to find her husband, a photojournalist who's been reported dead. She then appeared in the oft-delayed and over-budgeted flop, “Town & Country” (2001), as the beautiful daughter of an Idaho gun lover (Charlton Heston) who has an illicit affair with a down-and-out New York architect (Warren Beatty). In “Crush”, MacDowell played an American expatriate in charge of a British private school who carries on with a former student fifteen years her junior. She then played one of the loyal clients of Gina Norris (Queen Latifah), who introduces her cutting-edge hairstyles from Chicago to Atlanta in “Beauty Shop” (2005), a spin-off of the popular “Barbershop” franchise.