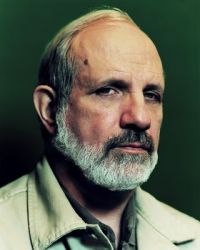 Brian De Palma has attained an unusual position in contemporary Hollywood filmmaking over the last several decades. Straddling generic and critical categories, his work has claimed fervent supporters and detractors. Now often hailed (and marketed) as the 'Modern Master of Suspense', De Palma has roots in the rarefied soil of the NYC avant-garde theater. He began as a 'committed' New York-based independent filmmaker whose left-leaning countercultural comedies of the late 1960s and early 70s owed much to the early films of Jean-Luc Godard (e.g., the 1966 political comedy 'Masculine-Feminine'). Later dismissed in some quarters as a purveyor of bloody, misogynistic generic sleaze, he graduated to helming a number of big-budget A-list films with such top-drawer stars as Al Pacino, John Travolta, Sean Connery and Robert De Niro. Rarely classified as an actors' director, De Palma has elicited an impressive number of acclaimed performances (e.g., Sissy Spacek in 'Carrie', Sean Penn in 'Carlito's Way'). Not one to be pinned down, De Palma has continued to confound categories.
De Palma earned 'street' credibility among action fans by helming slick yet tough crime dramas ('Scarface' 1983; 'The Untouchables' 1987; 'Carlito's Way' 1993) but his fluent, inventive and defiantly excessive cinematic style also made him a darling of cineastes. The now-classic prom sequence in 'Carrie' (1976), with its use of the split screen, slow-motion and cross-cutting, typified the rich versatility of De Palma's craft. The 'alternative' politically-minded press gave serious attention to 'Casualties of War' (1989), an ambitious cinematic excursion into Vietnam. Even his most notorious flop, a problematic adaptation of Tom Wolfe's novel 'Bonfire of the Vanities' (1990), was deemed a significant cultural event worthy of a book-length chronicle of its production.
De Palma's thrillers have paid extensive homage to Hitchcock—indeed they often flirt with plagiarism. Examples abound: 'Sisters' (1973) owed a large debt to both 'Psycho' (1960) and 'Rear Window' (1954); 'Obsession' (1976) reworked 'Vertigo' (1958); 'Dressed to Kill' (1980) was a slick take on 'Psycho'; and 'Body Double' (1984) was a gratuitous return to the themes of 'Vertigo' and 'Rear Window.” De Palma's films, however, differ strikingly in subject matter and technique. Furthermore, Hitchcock has hardly been his sole cinematic reference--Eisenstein, Antonioni and Michael Powell have been similarly referenced. De Palma presented his own version of the Odessa Steps sequence from 'Potemkin' (1925) in 'The Untouchables,” 'Blow-Up' (1966) informed 'Blow Out' (1981) and 'Peeping Tom' (1960) was just one of the sources evoked by 'Raising Cain' (1992). Although he has been criticized for portraying graphic violence, De Palma has retorted that he has incorporated Eisenstein's theory of montage as conflict, that 'film 'is' violence.' Stylization acts to aesthetically distance De Palma's violence so that it becomes a visual effect rather than a naturalistic detail.
De Palma began making films as a student, first at Columbia, later at Sarah Lawrence. His 1962 short, 'Wotan's Wake', won him several awards and his first feature film. 'The Wedding Party' (produced in 1966; released in 1969) is best remembered as the feature debut of Robert De Niro and Jill Clayburgh. 'Greetings' (1968) and its sequel, 'Hi, Mom' (1970), were inventive, uneven, and exceedingly low-budget (,000 and 0,000 respectively) films shot on the streets of NYC during the tumultuous Vietnam era. These works revealed the young De Palma attempting to be an American Godard, making challenging and critical films that commented on contemporary politics, film history and the nature of the medium. The films had a raw documentary immediacy that was enhanced by improvisatory performances, long takes and location shooting.

Beginning with 'Carrie,” his commercial breakthrough, De Palma's work began to explore recurrent themes and narrative patterns. The framing device of the dream/nightmare brackets films as diverse as 'Dressed to Kill' and 'Casualties of War'. Many of his features have portrayed a failed attempt to rescue an endangered female, as most tragically played out in 'Blow Out'. De Palma's fascination with the dual role of the gifted young person as a heroic ideal and outsider is illustrated in 'Carrie' and 'The Fury' (1978) while a subtext of family romance and Oedipal conflict underlies the psychological power of De Palma's vision. Such elements as the search for the father, repressed incestuous desire and sibling rivalry appear in several of his films. The complex narrative structures of 'Obsession', 'The Fury' and 'Raising Cain' examine these themes with particular force. De Palma also explores the dynamics of sadomasochism and voyeurism in 'Body Double,” 'Dressed to Kill' and 'Blow Out.'

De Palma has utilized genre to explore social and ethical tensions that deconstruct the American mythos. Possible paranoid conspiracy and power politics shape the ethical dilemmas of the several of his young heroes (e.g., 'Mission: Impossible' 1996). While De Palma may peripherally examine larger social issues of institutional, professional and political corruption (notably 'The Untouchables') the director regards himself as an artist and not a polemicist. Even 'Carrie,” which explores the social conformity and cruelty of teenage bonding, essentially parodies itself through De Palma's characteristic black humor. Moreover, one can argue that even an overtly political thriller like 'Blow Out' is as much about a film artist's disenchantment with technique as it is about a citizen losing faith in the System.

Although De Palma has worked primarily in the psychological thriller genre—a frankly commercial move after the nearly career destroying debacle of 'Get to Know Your Rabbit' (1972)—elements of comedy, romance, horror and gangster melodramas are explored as well. Adept at urban location shooting, De Palma has brought to the screen the visual ambiance of such cities as Chicago, New York, Philadelphia, New Orleans and Florence. Even 'Casualties of War,” an anomaly in genre and location, nevertheless begins and ends on a San Francisco train.

De Palma's most important contributions to contemporary cinema lie in his inventive, visually-dynamic style. He frequently employs such techniques as the stalking, searching camera, split screens, slow motion, 'God's eye' point-of-view shots, and an expressively detailed mise-en-scene. A master of rhythmic editing, he has often opened his films with extended, viscerally composed sequences that confirm his status as one of the great stylists of contemporary American cinema (most recently in 'Snake Eyes' 1998). Nonetheless, his commercial status has remained inconstant.

The success of 'The Untouchables' raised De Palma's stock in Hollywood and gave him the freedom to direct 'Casualties of War.” This worthy project was probably not expected to rake in box-office receipts but 'Bonfire of the Vanities,” prior to release, showed every sign of being commercial. After that debacle (which still has its devoted admirers), De Palma returned to his once reliable medium budget thriller mode, helming 'Raising Cain' as if in penance for the excesses of 'Bonfire'. When this underrated jet black comedy failed to win over critics or audiences, he reunited with 'Scarface' star Al Pacino (who had just won the Best Actor Oscar) to make a presumably popular gangster movie ('Carlito's Way') which fizzled at the box office. De Palma then directed superstar-producer Tom Cruise in 'Mission: Impossible', and though his first excursion into the high-tech world of special effects-driven action spectaculars necessitated his spending five months of post production at friend George Lucas' Industrial Light and Magic Land, the result was his biggest hit since 'The Untouchables', earning him carte blanche in choosing his next picture, 'Snake Eyes' (1998). This thriller, however, disappeared quickly after opening with a bang on the strength of De Palma and star Nicolas Cage's names.

Even more poorly received was 'Mission to Mars' (2000), a not-too-futuristic sci-fi adventure which contained a handful of powerful kicky images that were in line with De Palma's bag of visual tricks. But De Palma’s flourishes and the film’s top-flight cast of Tim Robbins, Gary Sinise, Don Cheadel and Connie Neilson were not enough to pump life into the longwinded, uninspired script. Continuing to reaffirm his reputation for adding visual panache to clearly inferior material, De Palma returned to erotic thriller territory in 2002 with his self-penned 'Femme Fatale,' a trashy and lurid noir thriller starring Rebecca Romijn as a former jewel thief whose reinvented life as a powerful politician’s wife is turned upside down by an intrusive photographer (Antonio Banderas). Despite the sizzling onscreen chemistry between Romijn and Banderas, “Femme Fatale” failed to crack the public’s collective consciousness and earned a measly million at the box office.

De Palma tackled Los Angeles’ most notorious and grisly unsolved murder for his next film, “The Black Dahlia” (2006), a flashy, but badly flawed adaptation of James Ellroy’s opening salvo to his famed L.A. quartet. Ellroy’s novel was a complicated and richly-textured noir thriller about two hard-edged cops (Josh Hartnett and Aaron Eckhart) who descend into obsession, corruption and sexual degeneracy as they investigate the brutal murder of would-be actress Elizabeth Short (Mia Kirshner), who was found tortured and vivisected in a vacant lot. But De Palma, always one to choose style over substance, honed down the dense novel to its bare essentials while using the pomp and circumstance of visual trickery to add heft to a thinned-down storyline. Some scenes in the film stood out—namely the black-and-white screen tests of Short performing for casting directors—but overall De Palma disappointed, particularly with an unbelievable ending that came out of left field and left audiences scratching their heads. Poor reviews and general disinterest translated into a poor showing in theaters.