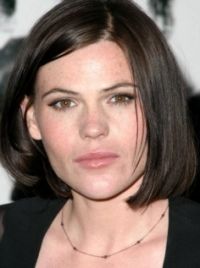 Since her debut in the little seen 'Little Witches', (1996) prolific actress Clea DuVall has racked up an impressive number of film credits in a short time. The sandy-haired, freckled player gave a spirited comic performance as the star of the quirky independent feature 'How to Make the Cruelest Month', which made the festival circuit in 1998. As Bell Bryant, a young woman desperate to fall in love and determined to quit smoking who reaches a crossroads in her life that coincides with the new year, DuVall won acclaim for her work as the intensely neurotic heroine. Generally cast in roles that downplay her average looks, DuVall, like many enduring actresses before her, has made a name based on her skill and dynamic presence rather than her pretty face.

After small parts in 'The Alarmist' and 'Can't Hardly Wait' (both 1998), the young actress gave an impressive performance in the teen sci-fi thriller 'The Faculty' (also 1998) as Stokely, a tough outcast with useful knowledge of the conventions of science fiction. Meant to be the 'ugly duckling', her character was far too smart and smoldering for such simple classification and her sharp and sensitive portrayal of the sarcastic misfit proved a highlight of the movie. Especially compelling in this Robert Rodriguez/Kevin Williamson contribution to the teen horror genre was her budding relationship with football hero-turned-academic Stan (Shawn Hatosy). In 1999 alone DuVall was set to be featured in several releases. Among these were her starring role in the drama 'Wildflowers', playing a young girl whose life is changed by the arrival of a mysterious woman (Daryl Hannah), and supporting turns in the drama 'The Astronaut's Wife' and the teen comedy 'She's All That'. The busy actress also joined the ensemble of 'Girl Interrupted' (lensed 1999), a true-life cross between 'The Snake Pit' and 'One Flew Over the Cuckoo's Nest' that featured Winona Ryder, Angelina Jolie, Brittany Murphy and Vanessa Redgrave.

DuVall had the lead in the indie 'See Jane Run' (2001), playing a formerly suicidal Los Angeles waitress who decides her life does have meaning after all when she finds a gun that was thrown away after a convenience store robbery and embarks on a life of crime. That same year she appeared in John Carpenter's sci-fi/horror hybrid 'Ghosts of Mars'; played a meek itern with unexpected reserves of courage in the video game TV horror thriller 'How to Make a Monster'; played a house cleaner who is good at her job but works for a client who can only criticize her in 'Thirteen Conversations About One Thing.' She was part of the all-star ensemble of 'The Laramie Project' (2002) which dramatized the effects of the murder of real-life gay teen Matthew Shepherd on the town of Laramie, Wyoming. The actress next appeared in a leading role in another indie, playing a sad-eyed bartender who sexually initiates a small town football hero in 'The Slaughter Rule' (2002). She was tapped by her 'Girl, Interrupted' director James Mangold to play a newlyed, part of a seemingly desperate couple, in the mysterious thriller 'Identity' (2003) in which ten travelers stranded in a motel are marked for death one by one. Later that year she played Naomi Watts' sister in director Alejandro Gonzalez Inarritu's well-received drama '21 Grams.'

Among DuVall's many television appearances include a featured role in the Showtime original movie 'The Defenders: Payback' (1997) as a girl whose father is on trial for killing her sister's rapist and a memorable guest appearance in an episode of The WB's hit series 'Buffy the Vampire Slayer', where she played an unpopular girl who becomes invisible and wreaks havoc on everyone who didn't notice her before. She also earned recurring roles on several series, including 'ER' and 'Popular.' In 2003 she had a high-profile role in 'Carnivale,' HBO's quirky, Depression-era drama set amidst a troupe of carny performers and freaks, playing the tarot card-reading psychic Sophie., and she followed up with an appearance in the hit horror film 'The Grudge' (2004) playing one of the people who falls prey to a violent curse on a Japanese home.