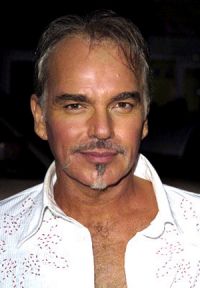 Billy Bob began his artistic career as a musician, playing drums and singing in a band called Tres Hombres, which once opened for 'Hank Williams Jr' . In 1981, he moved to Los Angeles with childhood friend Tom Epperson to pursue an acting and writing career. On the side, Billy Bob also sought work as a singer and drummer. He and Epperson tried for years to sell their scripts but no one was buying.

During those rough times, Billy Bob neglected his health and subsequently landed in the hospital with heart problems due to malnutrition. In 1992, Billy Bob starred in One False Move (1992), a movie he co-wrote with Epperson. The team finally received attention because of this work, which was very well received in Hollywood. His popularity increased steadily, especially after Sling Blade (1996) which he wrote, directed and in which he starred.

Billy received a star on the Hollywood Walk of Fame on October 7, 2004.